Elon Musk will create house roofs made entirely of solar panels, in a sweeping expansion of Tesla’s clean energy ambitions.

Tesla has finalized a $2.6bn deal to buy Solar City, and to begin producing photovoltaic shingles. This would allow Solar City to create roofs made entirely of solar panels. That coupled with Tesla’s home powerwall, is their effort to create a one stop shop for clean energy production and storage.

“I think this is really a fundamental part of achieving differentiated product strategy, where you have a beautiful roof,” Musk said. “It’s not a thing on the roof. It is the roof.” 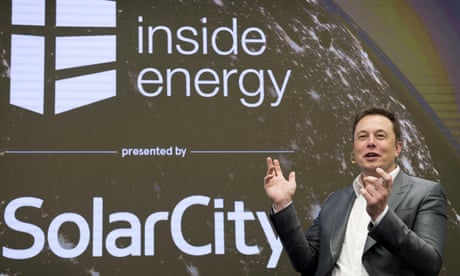 Musk describes the deal as a“no-brainer” to shareholders, stating  that it would combine the solar panel roofs with Tesla’s PowerWall home batteries, to store electricity for later use in the evening.

A statement released by Tesla and Solar City said they are creating the “world’s only vertically integrated sustainable energy company” and will work on releasing two new solar roof products by the end of the year. SolarCity has, however, reduced its forecast, citing costs, for megawatt installations for this year.

According to Rive, there are 5m new roofs installed every year in the US. The vast majority of American houses have asphalt roofs, which soak up a lot of heat and can be hard to replace.

“If your roof is about to need to be replaced, you don’t want to invest in solar panels to install on it since you are about to take it down – but if the solar panels are the roof and you need to redo it anyway, there’s no reason not to go with a power-generating roof,” said Rive.

The cost of households becoming solar has fallen by 70% over the past decade in the US, with more than 1m American homes now fitted with solar panels – up from just 30,000 homes in 2006. In July, the Obama administration announced an initiative to deliver one gigawatt of solar to low-income households by 2020.


It’s estimated that PV panels on 0.6% of America’s land mass would provide enough electricity to power the entire country. California has taken the lead in both household and large-scale solar power generation, accounting for half of the homes with solar panels and hitting a peak generation of 8 megawatts of electricity from solar plants on July 12 – enough to power more than 6m homes.

Rapid deployment of clean energy will be required if the US, and other countries, are to slash emissions quickly enough to meet climate change targets agreed at the Paris Convention last year.

The agreement’s ambition to limit the global temperature rise to 1.5C above pre-industrial times is likely to be blown within just five years on the current trajectory of emissions, according to a recent analysis.

Even if emissions are radically cut in the next few years, new technology will be needed in order to remove carbon dioxide from the atmosphere and store it underground to avoid temperatures that will affect the world for the next century.