Here in Los Angeles, we are total health foodies. We love a fresh green juice, super fruit smoothie, gently massaged kale salad, literally an avocado anything, and most importantly: Veggie Burgers. When we heard Impossible Foods was coming to Hollywood’s Umami Burger, we screamed in joy (so much that we almost wet our Lulu Lemon’s).

All LA culture jabs aside, this burger is seriously no joke. We’ve been 3 times since they partnered with Umami on May 17, 2017 and we dream about it every. Night.

So why all the rage about the impossible foods burger? Why’s it so different from any other veggie burger? Surely it’s got a black bean or two up in there, maybe some quinoa? Or brown rice? What gives?

The Impossible Veggie Burger is made from all-natural ingredients such as wheat, coconut oil, and potatoes; All formulated into a perfectly perfect patty. But what truly makes the Impossible Burger so deliciously unique is an ingredient called heme (an iron-based compound of the porphyrin class that forms the nonprotein part of hemoglobin, and some other biological molecule magic). It’s really science-y sounding, but packs a flavor that, get ready: TASTES. EXACLY. LIKE. MEAT.


Heme is a basic building block of biology (all life on earth) but it’s uniquely abundant in meat. We discovered that heme is what makes meat smell, sizzle, bleed, and taste gloriously meaty. Consider it the “magic ingredient” that carnivore’s crave.

To replicate fat, flecks of coconut oil are mixed into ground “plant meat” (made from textured wheat protein and potato protein). The potato protein provides a firm exterior when the meat is seared, and the coconut oil stays solid until it hits the frying pan, where it begins to melt, just like beef fat.

The burger has more protein, less fat and fewer calories than a patty that’s 80 percent lean meat and 20 percent fat. And because it’s plant-based, this “meat” has no cholesterol.

Made entirely from plants, the Impossible Burger is doing the environment a giant favor by using 75% less water, generating about 87% fewer greenhouse gases and requiring around 95% less land than conventional ground beef from cows. It’s also produced without hormones, antibiotics, cholesterol or artificial flavors.

So why switch from beef? Why should it matter if I’m eating cows or not? And what’s this I hear about cows having to do with climate change?

Even though carbon dioxide is the primary culprit of climate change, methane is 84 times more powerful when it comes to trapping heat in the atmosphere. In result of mass production of burger meat, large amounts of livestock “emit” a variety of greenhouse gases, the most worrisome byproduct of their digestive tract being methane. Additionally, methane diffuses into the air quickly, creating a more rapid warming effect than other greenhouse gases. Beef has a larger carbon footprint per pound than any other popular meat: two times larger than lamb, six times larger than pork, and seven times larger than chicken.

These giant livestock farms are also responsible for two-thirds of the ammonia released into the air, due to humans demanding more beef. Ammonia is toxic to water-dwelling animals, harmful to fertile soil, and plays an important role in transporting pollutants that cause acid rain into the atmosphere. 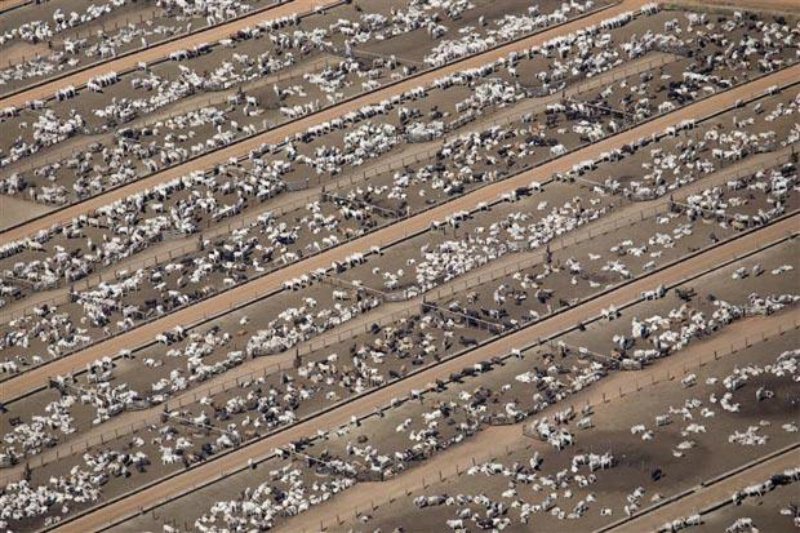 Beef is the SUV of meats when it comes to its carbon footprint.

Agriculture in general takes up 30% of the Earth’s land surface, and cow farming accounts for 70% of this. Naturally, cows are the most land-intensive compared to other livestock: they are much bigger, eat more, use more water and produce more waste. Beef production takes 28 times more land to produce than chicken or pork, and 160 times more land compared to staple veggie crops like wheat or rice.

Unfortunately, to make more grazing land for livestock, farmers usually turn to cutting down forests. In the Amazon, 80% of deforestation is attributable to cattle ranching.

This is where Impossible Foods steps in to save the day.

Impossible Foods isn’t targeting vegetarians, they want carnivores. A meat lover would go for veggie patties more often if they had an option that really replicated the burger-eating experience. So they’re trying to replicate what accounts for the sensation of eating beef.

Impossible Foods’ production facility in Oakland will now start large-scale producing Impossible Burgers this summer and is on track to produce as many as 1 million pounds of plant-based meat per month when fully ramped up within one year. The site has the capacity to make 250 times more Impossible Burgers than the startup is currently making in its headquarters in Redwood City, California, and at a small facility in New Jersey. The burgers are currently served in nearly two dozen additional restaurants in both New York and California. See full list of restaurants here.

Even more good news! In addition to the Impossible Burger, the company is actively developing additional types of plant-based meats and dairy products.* Aw yea.

To Conclude: even if you don’t have an Impossible Burger to feast upon locally (yet!), we at Greenism hope this article finds a way to inspire you to choose veggie burgers as a substitute for beef when possible. We need to act now to try and reverse the damages we’ve done by choosing our food wisely.